Sadie is co-Artistic Director, playwright, & actor of theatre company Old Trunk. She is a multi award-winning columnist, & has written & performed extensively for television, radio, & on the international comedy circuit, including various TV series with Al Murray, Harry Hill, Russell Howard, Jenny Eclair, Rebecca Front & many others on BBC/ITV/SKY/Comedy Central. She is currently editing her first novel. Her plays Pramkicker, Fran & Leni, and Stiletto Beach are all published by Bloomsbury Methuen Drama. Sadie was nominated as Best Actor for her role as Leni in Fran & Leni, and for Best Drama in the Greater Manchester Fringe Awards. Pramkicker then went on to win Best Revival in Greater Manchester Fringe Awards in 2019, as well as company Postcard Theatre being nominated for Best Comedy Play and two Best Actor awards.

Pramkicker and Fran & Leni have also both gone on to international success, including multiple productions in Washington DC (inc Kennedy Center), Chicago, Melbourne, Sydney, and an Italian translation/productions of Pramkicker in Rome, Milan, Asti, and Gualtieri.

Sadie has twice appeared on hit podcast The Guilty Feminist, with host Deborah Frances-White calling Pramkicker “the most important play of the last decade” and Stiletto Beach “Incredible…made me cheer, roar & weep”

In addition to writing for performance, Sadie writes regularly for publications. She has been The Society of Editors Regional Columnist of the Year & EDF Media Awards’ Regional Columnist of the Year. She was commissioned to write a piece on suicide & grief for The Lancet, was a core contributor & collective member for alternative women’s magazine Standard Issue, set up by Sarah Millican, & wrote weekly for The Southend/Basildon/Canvey Echos & The Colchester Gazette for 6 years garnering numerous nominations/awards, monthly for Life & Homes, & has contributed to Trawler paper & book SALT. She was honoured to contribute an essay to Last Christmas, alongside Meryl Streep, Stephen Fry & many others, edited by Emma Thompson and Greg Wise and published by Quercus.

Sadie has featured in numerous exhibitions, including Things curated by Tamara Projects, Salt curated by Grow/Insight, EGLF’s This Is What An Essex Girl Looks Like at the Beecroft Gallery, and photographer Mark Massey’s online project Essex Girls.

Sadie is represented for plays, television & film by Conrad Williams at Blake Friedmann Literary Agency, and for books by Zoe King at A M Heath. 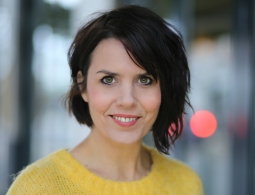 Sarah is an actor/director and Co-Artistic director of Old Trunk, she has worked extensively in theatre, TV, film, comedy & radio. Sarah can be seen in the BBC/NETFLIX series White Gold as Maggie Farrell & as Tracy in the multi award winning film My Brother is a Mermaid. Sarah was nominated as Best Actor for her performance as Fran in Old Trunk’s Fran & Leni at the Greater Manchester Fringe Awards, which she also directed.
Sarah started her career as a dancer, and her first job saw her running away to join a Mexican Circus, all feathers and fishnets. She also worked as the magicians assistant, getting cut into 10 pieces on a nightly basis, three times a day at the weekend! After surviving that Sarah went on to dance internationally & in the UK.
After hanging up her tail feathers, she formed a new writing theatre company, Platform Theatre and established the first pub theatre in her hometown. She performed in, produced & hosted the critically acclaimed improv group Quirkish Delight & appeared in & wrote for a host of comedy sketch shows as well as co-hosting her own radio show.
Other credits include:
Fran & Leni (Fran), Pramkicker (Jude), The Bastard Children of Remington Steele (Beatrice), The Secret Life of Andy Williams (Enid), Lady Bones (Ted Hughes & Bette Davis), Fakespeare (Traciea), The Winslow Boy (Miss Barnes), The Sunshine Boys (Nurse Mackintosh), Erpingham Camp (Miss Mason), Danny & the Deep Blue Sea (Roberta), When I Was a Girl I Used to Scream & Shout (Vari), Serving It Up (Wendy), Road (Helen/Louise)
As a director Sarah has directed all of Old Trunk’s work and was Assistant Director to Douglas Rintoul on DNA for Central School of Speech & Drama and Queens Theatre Hornchurch.  Sarah was accepted onto the RTYDS & is a member of the Young Vic Directors Scheme.
Sarah also works to alter the cultural perception of the tired, lazy, Essex Girl stereotype with her activist group the Essex Girl Liberation Front, and as part of this work she co curated the exhibition This is What an Essex Girl Looks Like. Sarah is also a keynote speaker at various educational conferences with her work on confronting sexual harassment within the industry with her workshop/speech Blurred Boundaries.
“balances knife-edged irony with heart-rending sensitivity”  – The Stage “Charismatic and passionate” – The Scotsman